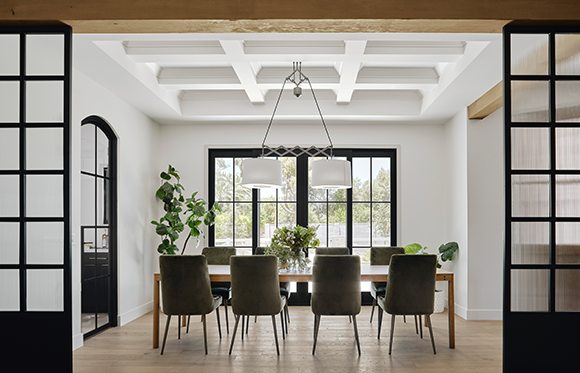 If things had gone a bit differently, Austin King might have not been known for his well-crafted renovations and new builds in Arcadia and Paradise Valley. Instead, he might have joined the ranks of riders like Eddy Merckx, Tadej Pogacar, Chris Froome and other Tour de Francers on the circuit of competitive road racing.

“My father owned a bike shop,” explains King, a long-time Arcadia resident, “and I got interested in road cycling at a young age. In fact, I turned pro after high school and lived in Europe for five years pursuing the sport.” But, as King puts it, long hours on windy, rainy roads in West Flanders gave him a lot of time to think about his career. By the time he met his future wife, he realized that road racing did not exactly mesh with a stable family life.

“I ditched the Lycra, sunscreen and power bars for slacks and a laptop,” King says of his return to Phoenix and getting into real estate in 2007. He took advantage of the real estate crash by buying distressed properties, fixing them up and selling them. The 180 from cycling to the design/build world was not without precedent for King—his mother is Gera King, who ran Scottsdale Community College’s interior design program for years and served as an ASID chapter president. “My mother was always rearranging the house when I was growing up,” he remembers. “I guess this was in my blood.”

After a few years of fixer-uppers, King became a licensed contractor and Rafterhouse (rafterhouse.com) was born, specializing, at first, in the remodels of classic

Arcadia ranch homes, then expanding into new builds, done initially in a transitional style that complemented the Arcadia architectural aesthetic.

In 2019, he moved his staff—which now numbers 11 and includes an interiors department—into a restored 1920 bungalow on 44th Street in Phoenix, built by Frank Avery, a pioneer Arizona citrus grower. “It’s a special place to me,” King notes. “I have an appreciation for history and a good story. We try to infuse that into our projects.”

The bungalow also came with two adjacent residential lots, for which King collaborated with architect Michael Higgins to design and build two modern-day Craftsman-influenced bungalows, now used as rental properties. “They’re fun, vibrant and quaint homes,” he says, “and they both relate to the original 1920 house, which is our headquarters.”

Bungalows aside, King has been busy building his portfolio with more custom homes, ranging in size from 4,000 to 11,000 square feet, and working with the likes of architects Mark Candelaria, Jim Blochberger and Higgins, as well as landscape firms such as Refined Gardens and Greey/Pickett. “We’re still doing transitional homes,” he notes, “but we’re also getting into more contemporary designs.”

King was an early adapter of social media to get the word out about his projects. “We let people know that we don’t just swing hammers around,” he says. “We are part of the creative process.”

Taking advantage of what he calls “the lively real estate market now,” King just completed the renovation of his own 1951 Arcadia home, and has some eight active residential projects in the area.

At the end of the process, King says he and his team take care to make sure clients are happy when they get the keys to their new house. “I live in Arcadia. I go to OHSO and Safeway. I can’t escape my clients. I don’t want to walk into those places and think, ‘oh shoot, we have to leave ’because I don’t want to run into someone.” As of now, King can ride his bike to that local brewpub and get milk at the corner supermarket. Homebuilding is one road race he’s clearly won.