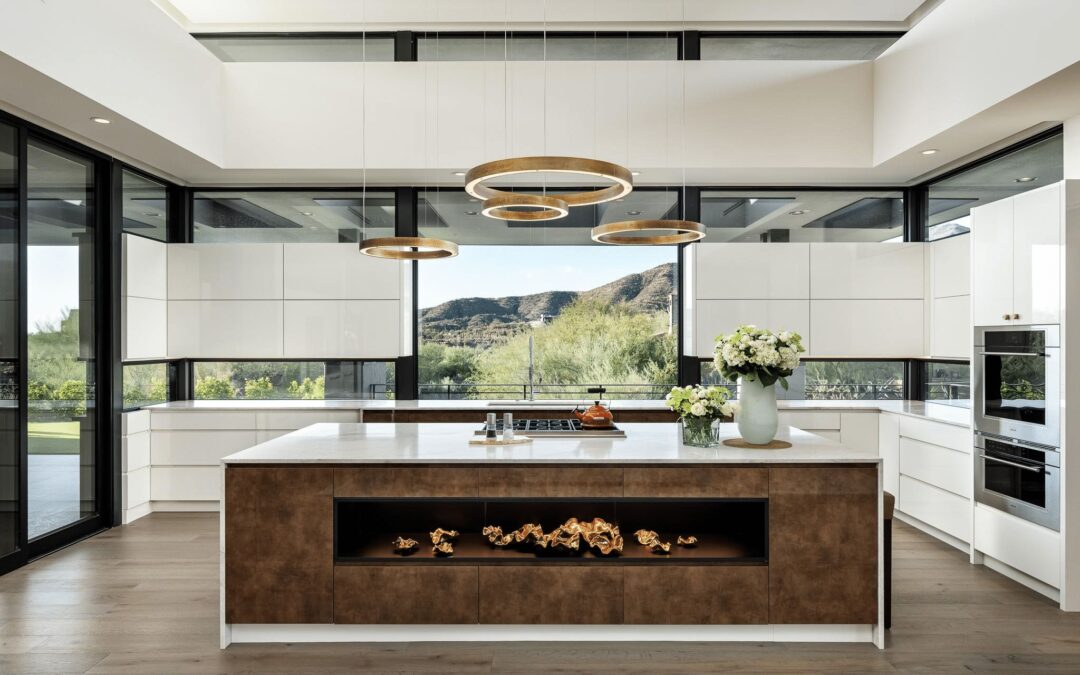 There’s something about the words “cabinetry shop” that brings to mind Gepetto’s workshop, a place filled with soft piles of sawdust, where the sounds of saws and sandpaper fill the air as smiling people work on their craft. At Distinctive Custom Cabinetry (distinctivecc.com), smiling people do work on their craft, but the setting is hardly one that’s embedded in our minds from the old Disney cartoon. Instead, it’s a high-tech, super-efficient, state-of-the-art facility founded in 2007 by Marc Poortinga and Mike Cook, where the 80 employees include teams of engineers and designers.

“We’re on time, we pay attention to the details and we love our clients,” says Cook of the company’s core values.

The two business partners met in 2005 when both of them worked for an interior door company. Poortinga, an Iowa native, had previously worked for Pella Windows and Doors, while Cook was at another local cabinetry company. “We knew we wanted to start our own business,” remembers Poortinga, “and we wound up launching right at the start of the recession in a 6,000-square-foot shop with two builders and two finish guys.”

They started out doing closets and slowly added products, crediting builder Calvis Wyant with helping them with their early success. A 22,000-square-foot home in Las Vegas with “hand-carved everything” also helped put Distinctive Custom Cabinetry on the map. Today, the firm works with interior designers such as Claire Ownby and Lissa Lee Hickman, and other builders like Dick Lloyd, Platinum Companies and Cullum Homes, for whom they are detailing the Phoenician Ascent community. Many of their projects have received Gold Nugget and other design awards for the builders, interior designers and architects.

More recently, a vendor got them into a Frank Gehry-designed compound in Atherton, California. “The architecture is ‘holy moley,’” quips Cook of the internationally acclaimed architect’s avant-garde design. “We’re doing all the cabinetry, interior doors and even some bunk beds in a simple, lacquered rift-cut white oak design, so that it doesn’t compete with the architecture.”

The success allowed them to move into larger quarters in 2012, in an industrial setting in the Deer Valley neighborhood of north Phoenix. They’ve expanded into a second building on the 1.5-acre site, now having some 25,000-square-feet of space that includes a newly opened showroom where they can spotlight kitchen designs, door styles and more. “We display about 600 door styles,” says Poortinga, “but those are just starting points. We customize everything.”

Currently, Poortinga and Cook are seeing more contemporary looks being built in their voluminous shop, many with details like slatted or reeded doors, metal detailing or textured finishes. “We’re not getting much demand for dark colors or heavy carving these days,” says Poortinga.

In 15 years, they’ve had more than their share of out-of-the ordinary installations, including wrought iron-clad safe rooms, gun safes, a jewelry room that’s entered through a mirror and a closet installed with a dry cleaner-style garment conveyor. “Everything is numbered,” explains Cook, “and the owner can pull up a garment on an iPad.” Other unusual projects include a kitchen island embedded with a fireplace on one side, an underlit onyx-covered island with a TV lift, a gas range that floats between two islands and a two-story closet, complete with a glass display case for the owner’s wedding dress.

Gepetto may not be on Distinctive Custom Cabinetry’s payroll, but there is a magic touch to the company’s ability. Says Cook, “We can figure out how to build just about anything.”