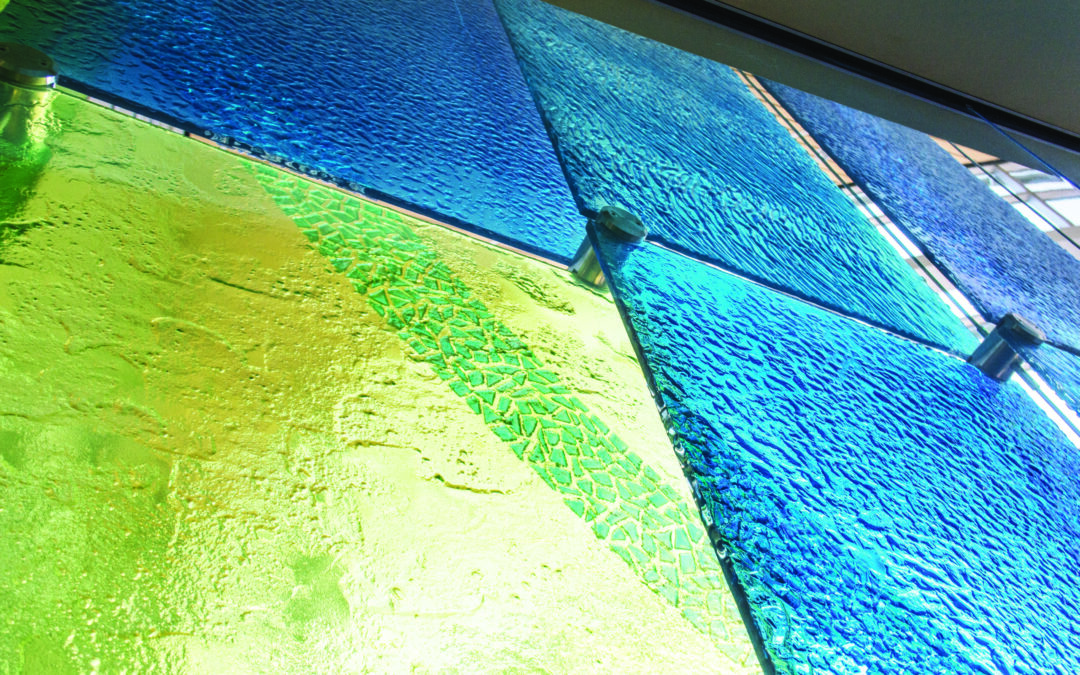 At Meltdown Glass (meltdownglass.com) in Tempe, the scent of Sprayway wafts through the air. The company, which designs and manufactures kiln-fired glass for art and architecture, has been going through hundreds of cases of the glass cleaner of late, making sure that supplies, samples and finished products—ranging from residential powder room sinks to wall cladding at major U.S. airports—is kept free of fingerprints and smudges. Post-pandemic, business is booming for the firm.

“We serve mostly architects and interior designers,” says owner Pete Hayes, “and we credit clients for our growth. We do what our clients want us to do.”

Meltdown Glass has its roots in fine art. BJ Katz founded the company in Tempe in 1993, after pivoting from a long career as a social worker in Canada. At first, she pursued her own fine art, namely a series of glass torso figures that celebrated imperfect bodies and celebrated acceptance. Eventually, her work in kiln-fired glass attracted other projects, particularly after Hayes joined Meltdown in 2000, while he was still a design and architecture student at ASU. “BJ liked commission work, galleries and public art,” explains Hayes, who eventually became a partner in the company. “I had a different leaning, which was architectural glass. We melded both.”

When Katz passed away in 2018, Meltdown was firmly entrenched as a national player in architectural glass, as well as art installations, and remains so, thanks to the continuing guidance of Hayes, as well as creative director Chris Klein, who joined the company in 2000 as well,  as an art assistant to Katz. Klein, with a BFA in sculpture and glass from the Cleveland Institute of Art, handles the design and process details, while Hayes tends the business side.

Now with a staff of 11, the company is located in an 18,500-square-foot facility, home since 2010, which includes a showroom, office space, a sample room and a cavernous workshop housing  seven kilns (the largest of which can accommodate 7.5 by 12.5-foot pieces of glass), storage for raw materials, polishing and finishing space and a crating area. “We use a crating company,” says Hayes, “and most of our installations are handled by glazing companies.”

During a recent visit, Meltdown was finishing up windows that were going into a clubhouse dining room for Studio V, large glass tiles for a wall at a residence designed by Holly Wright, dichroic class wall panels for a hospital lobby in Sarasota, Florida and fluted, reeded glass panels for a United Airlines lounge at Chicago’s O’Hare Airport.

“Some designers come to us with detailed drawings,” says Klein. “Others tell us what they’re looking for, with color samples and swatches. We will work with them to come up with a design.” Most projects, he says, have a six- to eight-week turn around.

Projects, says Hayes, range from small and simple, to elaborate, and have been shipped and installed around the country, as well as in Asia, the Middle East and Europe. Locally, you can see Meltdown Glass installations at the Desert Botanical Garden (the heritage wall), the glass in the lobby of the Scottsdale Center for the Performing Arts, at Talking Stick Casino (the glass staircase) and at Sky Harbor, in the new Southwest Airlines gates (the glass portal). The Bellagio Hotel, a Nieman Marcus in Walnut Creek, California and New York’s La Guardia airport and the Millennium Broadway Hotel also boast Meltdown Glass installations.

Of their more unusual projects, Klein points out the cobalt and maize-colored details that went a Scottsdale residence designed by architect Mark Tate for University of Michigan alums, and a partition wall made of two-inch-thick glass with an crashing wave motif for home office in Cape Cod that overlooks the ocean.

“We are lifelong students of glass,” says Hayes. “Our clients come to us and ask, ‘can you do this?’ We figure it out, and that’s where the learning comes in.”

It’s a philosophy that BJ Katz would approve, and a mission that Hayes, Klein and other colleagues promised her that they would carry on. “BJ passed the Meltdown Glass torch,” Hayes says, “and we’re carrying on her legacy.”