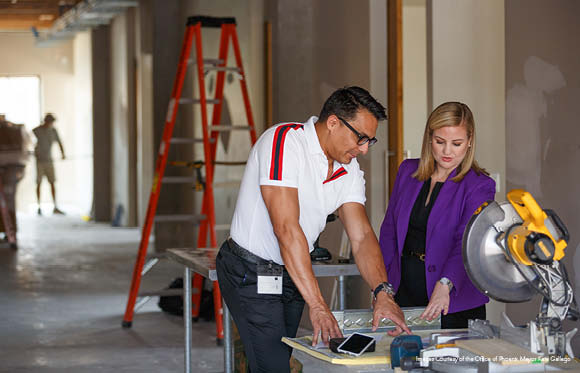 Mayor Kate Gallego has transformed the conversation of how we evolve our city. She has a long-term vision, and this allows us to work towards larger goals to secure a better future for our city. She is an advocate of public transportation, which we believe plays a crucial role on the sustainable future of our desert cities. She is a supporter of our diverse communities creating a more equitable place to live that is attracting people from many other cities every day. She has brought the design community to the table to help solve problems of the future as we continue to evolve our present.

More than just designing attractive structures and interiors, Gensler Phoenix has reached into surrounding communities to help envision and build better cities. Nowhere is this better exemplified than by the working relationship the firm has with the City of Phoenix and, specifically, with Mayor Kate Gallego.

“Gensler is very important to the city when it comes to conceiving and executing projects that help move Phoenix forward,” says Gallego, whose Harvard undergraduate degree in environmental studies makes her a keen participant in urban planning and sustainability discussions. “Gensler sits down at the table and helps us brainstorm, to think what’s possible, be it single buildings or key areas, such as our Warehouse District or the Rio Salado riverfront that runs through the city.”

Gensler’s relationship with the Office of the Mayor predates Gallego, a former member of the Phoenix City Council who took office in 2019 after her predecessor, Greg Stanton, ran for Congress. The key liaison between Gensler Phoenix aand the Mayor was Oscar De las salas, Gensler Phoenix’s Client Relationship Manager.

“I met [then] Mayor Stanton on a flight to Hermosillo, Mexico for a Sister Cities program,” says De las salas, a native of Colombia whose background includes fashion, set design, public relations and construction management, in addition to architecture. “We compared notes, and I thought there were many projects and concepts for which Gensler would be a good partner for Phoenix and the mayor.”

Stanton, in turn, introduced Gallego to De las salas—and Gensler—over coffee. “Oscar is just one of those people who has a passion for making great places and has a great vision,” says Gallego of the energetic De las salas, whose networking skills, as well as civic and cultural involvements, have earned him the nickname, “Mr. Phoenix.”

With Gallego, the Gensler partnership has remained strong. “Gensler is a global company, and we have a wealth of research and information to offer,” says De las salas. “We offer statistics, guidelines, information and, most important, experience.”

Working with the mayor’s office, Gensler has been involved in numerous large-scale Phoenix projects. “Gensler has re-envisioned the downtown corridor with projects like the Adams Street reactivation,” says Gallego of the reinvention that included updating the Renaissance Phoenix Downtown Hotel to include street-side amenities. “They are working with us on the historic Warehouse District just south of downtown and the ‘Rio Reimagined’ project, to make the entire Rio Salado riverfront a corridor for environmental and economic activity.”

Other Gensler projects that fall under the partnership with the City of Phoenix include a feasibility study for a Latino cultural center and a concept study for a proposed downtown hotel.

“We’re going to keep moving forward,” says Gallego of her plans for the city. “With help from partners like Gensler, we hope to create a sustainable, transit-oriented, diverse city that celebrates everything from our dense urban neighborhoods to our unique agricultural and equestrian areas.”

“It’s not just building by building,”De las salas says, summarizing Gensler’s work with the Office of the Mayor. “You have to have a mayor like Kate Gallego and a city council willing to listen to an architectural partner to help make a city. We are trying to create the city that we all need, helping with that change on a corporate level.”