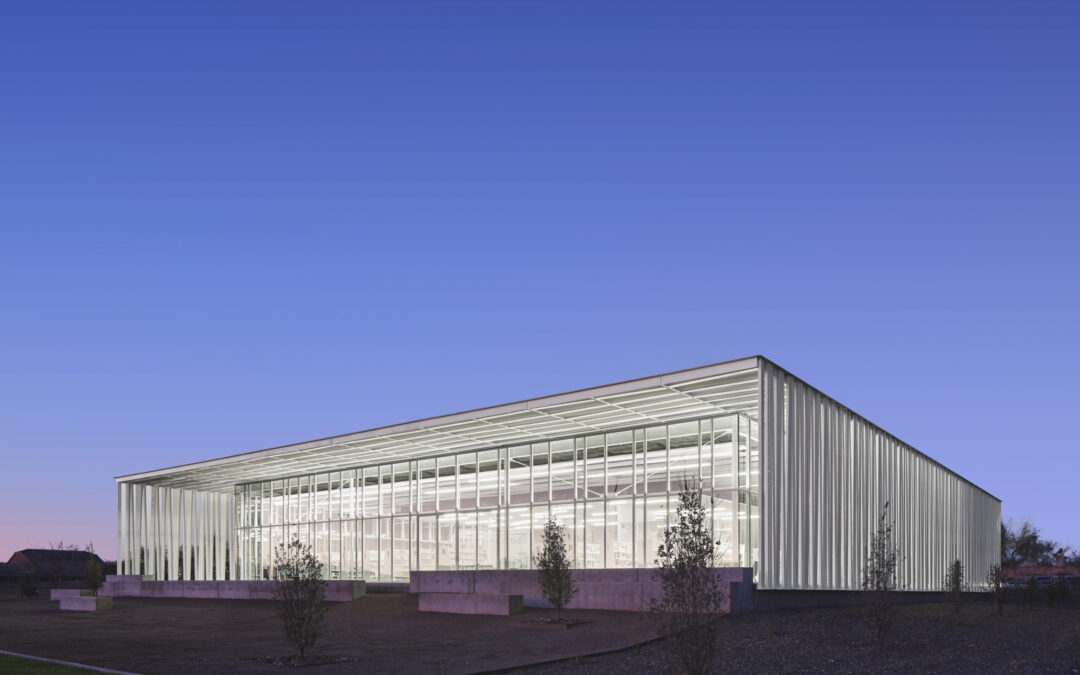 Richard/Kennedy Architects’ Asante Library in Surprise balances transparency and shelter in its design.

Designed as part of the Maricopa County Library District and located in a community park in  Surprise, the 10,000-square-foot Asante Library opened in 2020, serving the suburban city’s needs with areas for adults, children and teens, 16 computers, free WiFi, self-service printers and reservable study rooms.

The 12-acre park site has views of the nearby White Tank Mountains and doubles as a retention basin that drains along a local greenbelt. To prevent site disturbance and allow clearance for rainfall collection, the Richard/Kennedy design team placed the library on four-foot retaining walls that serve as an elevated plinth, providing the building’s foundation.

Design inspiration came from dappled sunlight, evocative of reading a book beneath the lacy canopy of a desert tree. To achieve the effect, a vertical canopy shields the building’s eastern, southern and western floor-to-ceiling glass elevations from the harsh desert sun. Made of white metal c-channels that rotate, angle and merge to create a unique pattern, the canopy is the library’s dominant visual expression. The library’s main programmatic functions are organized along its northern edge, inside a solid core finished with aluminum composite wall panels. The solid core forms the entry facade and is a backdrop to a large outdoor plaza that encourages community engagement.

Working with a team that included interior design firm White Baux Studio of Phoenix, Logan Simpson landscape architecture of Tempe and Haydon Building Corp. of Phoenix, Richard/Kennedy made design decisions based on the value added to the relative to cost, meaning the project met its tight budget while preserving the design’s integrity.

“We felt that there was really something quite elegant about the experience of being in this building,” says architect Timothy Hawk, FAIA, summarizing the project. Ohio-based Hawk served as jury chair for the 2020 AIA Western Mountain Region Design Excellence awards program, during which the Asante Library received an award. “We were impressed with the relationship of the building’s skin and its playful nature, and those interior environments. The plan is logical and flexible. We anticipate that this building will be resilient.”