Still Stylish After All These Years 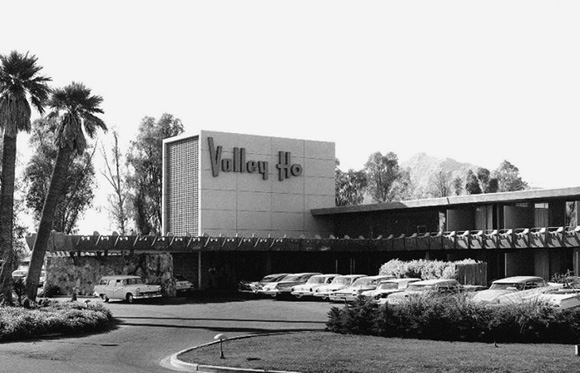 When hoteliers Robert and Evelyn Foehl engaged the services of Architect Edward L Varney, Jr. and contractor Kitchell-Phillips to design and build a hotel at the corner of 68th Street and Indian School Road in Scottsdale during the 1950s, they hoped to attract sun-seekers to the small Phoenix suburb, which had yet to make its mark as the resort capital of the Southwest.

The couple, who had previously managed hotels in Southern California, opened Hotel Valley Ho (hotelvalleyho.com) in 1956, offering lush lawns, a pool, restaurant and spacious, sunny rooms all framed by an edgy, modernist design. It was, by all accounts, the first resort to stay open all year round. Today, 65 years later, the hotel is still a relevant design icon and a magnet for locals and travelers, thanks to updates that have emphasized preservation and celebrated mid century style.

Varney, who graduated with a degree in architecture from USC in 1938, designed the hotel with four two-story wings, utilizing broad, low lines to link the project to the flat site, just south of the canal. Brick, concrete, glass and stone were part of the material palette, with arrowhead shapes made of pre-WW cast concrete delineating the balconies and deep roof overhangs, signaling Southwestern imagery.

The desert masonry walls and Indian motifs linked Varney by some to Frank Lloyd Wright, an urban myth in local design circles, said his daughter, landscape designer Lisa Varney, in a 2006 interview. “My father certainly knew Frank Lloyd Wright,” she says, “but he was never a student or protégé of Wright’s.” Instead, the architect went on to form Varney Sexton, Sydnor Associates with Reginald Sydnor and Robert Sexton, and design such notable Arizona structures as Sun Devil Stadium and the Phoenix Country Club.

For the Hotel Valley Ho, Varney also designed a tower above the lobby and restaurant segment of the property, which was cut due to budget constraints. But with uncanny foresight, Kitchell-Phillips engineered that building’s footings to be able to accommodate a future vertical expansion.
The Foehls—who sponsored a contest to name the hotel—were consummate hosts, living on premises and drawing numerous movie stars as guests from their days of running hotels in Southern California. Natalie Wood and Robert Wagner celebrated their (first) wedding reception at the hotel. Zsa Zsa Gabor and Bing Crosby were also among the marquee guests. Jimmy Durante was known to play piano in the lounge late at night.

After Robert Foehl died in 1973, the hotel was sold to Ramada. For decades, it languished, morphing into a business hotel best known for housing flight crews on layovers. Developers began eyeballing the property as a tear down.

In 2002, Scott Lyon and Bill Nassikas of Scottsdale-based Westroc Hospitality (westroc.com) bought the hotel, with the intent of restoring it to its mid century glamour. Lyon and Nassikas—fresh from converting the old John Gardiner’s Tennis Ranch in Paradise Valley into Sanctuary on Camelback Mountain Resort and Spa—tapped architects Allen + Philp Partners (allenphilp.com) of Scottsdale and the California-based interiors firm, Cole Martinez Curtis and Associates (cmcadesign.com), to handle the $80 million restoration, renovation and 220,000-square-foot expansion. Bringing the hotel full circle, Kitchell (kitchell.com) again served as the builder.

The restoration project, completed in 2005, peeled off decades of neglect and less-than-worthy design decisions, revealing Varney’s 1956 gem. ZuZu, a new restaurant, blossomed in the reimagined restaurant and lounge space; a new, circular pool was added to anchor the main courtyard; and a spa and rooftop event space were added. New ballrooms and a freestanding restaurant (now used as another event space) were also built, as was a seven-story tower (thanks to the existing footings), which houses 50 guest rooms and suites, in addition to the hotel’s 241 other rooms and suites. The updated, colorful interior took its cues from iconic furniture and fabrics from Knoll and Herman Miller, as well as inspiration from the textiles of Alexander Girard. In recent years, the hotel’s public spaces and guest rooms have been refreshed by Scottsdale’s 3rd Story (3rdstory.com), an architecture and interiors firm.

Today, the hotel finds itself in the midst of downtown Scottsdale’s burgeoning restaurant, shopping and nightclub scene, drawing locals and out-of-towners for everything from pool parties and dining to spa treatments and weekend escapes. Those with a passion for the past can take one of the hotel’s “Magical History Tours,” led by local cultural expert Ace Bailey, who highlights both the hotel’s Hollywood links and the architectural features.

Six and a half decades after the first guests checked in, Hotel Valley Ho still knows how to be a stylish, swanky Scottsdale gathering place.