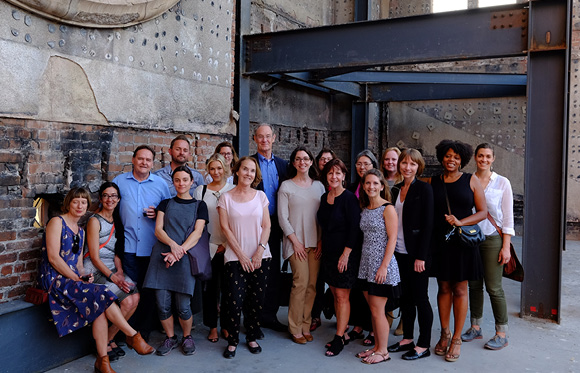 Though Mary Colter gets credit as being one of the first female architects working Arizona in the early 1900s, she was not technically a resident of the state. It’s thought that Annie Graham Rockfellow was Arizona’s first female architect, working in Tucson from about 1916 to 1938, most notably on the El Conquistador Hotel.

Those low figures have encouraged women in the design/build industries to support and mentor each other, either informally or through women-centric organizations. In Arizona, at least two groups put the spotlight on women in the profession.

The National Association of Women in Construction (NAWIC), a national organization founded in Texas 68 years ago, chartered the Phoenix chapter in 1966, at a time in Arizona when women were more likely to be girl Fridays than occupants of the C-suite. “I often used to be the only female at the table,” recalls Kathy Kinglsand, the human resource manager for Belaire Mechanical, Inc., who is on the board of NAWIC Phoenix (nawicphoenix.org) and a past president. “I was lucky in that I had mentors who encouraged me to be involved 110 percent. Through NAWIC, we’re trying to show young people that construction is a great field for women.”

, NAWIC Phoenix has numerous programs, says Lisa LaVoie, a vice president at Lovitt & Touché and the chapter president. “We use networking, education and community service to advance women in the field,” LaVoie says.

Pre-pandemic, the organization—which has 73 Phoenix-area members in all fields of construction—hosted monthly meetings at a downtown Phoenix hotel, which included speakers and, occasionally, job site tours, such as a visit to the OdySea Aquarium with McCarthy Building Companies. The networking events have been supplanted by Zoom meetings, which are still heavily attended. The group also often hosts collaborative meetings with NAWIC’s Tucson chapter.

NAWIC has also offered age-appropriate educational programs for elementary schools and CAD drafting competitions aimed at high school students. During this year’s Women in Construction Week in March, the Phoenix chapter came up with a construction coloring contest aimed at first through fifth grades and offered a book filled with images of careers in building.

The group’s community service projects have included work with Habitat for Humanity and the renovation of a classroom for the Sojourner Center, as well as the construction of several Little Free Libraries.

“One of the most important things this group offers is networking opportunities,” says LaVoie, “and the way to know what’s going on in the Phoenix market. We exchange information and share resources.”

“Women who are in construction understand each other,” adds Kingsland, who served as the first woman president of the Arizona chapter of the Sheet Metal and Air Conditioning Contractors National Association. “We’ve all had a few experiences that we just shake our heads about. With our group, you can just pick up the phone and talk to someone. And, for long-term members, it’s about the friendships that you make.”

Unlike NAWIC with its national roots, Women Design Arizona (WDA), (womendesignaz.org) is a homegrown organization, founded by Phoenix landscape architect and urban designer Tiffany Halperin, whose firm is the Urban Culture Design Project. “I’m an Arizona native,” explains Halperin, “but I started my career in Seattle. When I moved back to Phoenix, I felt like I needed resources that weren’t here. I wanted to talk to other women in my profession, comparing notes.”

She started WDA in 2003, originally calling it Women in Design. With about 20 original members in various design/build fields, the group soon grew to an email list of close to 400. Now on hiatus due to the pandemic, the group was previously gathering for regular happy hours at new or design-forward venues, often inviting the owner or designers to talk about the restaurant or bar. The group has also toured other job sites, including a courthouse done by Gould Evans, a church renovation and a member’s home that she was remodeling, and has visited design studios and architecture offices, such as Jones Studio in Tempe.

,” says Halperin, “so you don’t always have a chance to see cool, inspirational projects or hear others talk about their work. This gives us a chance to see what else is going on around us.”

In the past, the group has also taken on community service projects, such as donating professional clothing to shelters to help women get interviews and get back on their feet, and developed a day of shadowing with SmithGroup in Phoenix, allowing students to see the workings of an architecture office.

The group has bloomed to include not just architects and landscape architects, but also contractors, engineers, planners and others. While men are free to attend the events, most of the consistent attendees are women, Halperin notes.

“This is a free organization,” she says, “and it’s not about marketing yourself or getting jobs. There is no membership status or bylaws. It’s all about who you are and what you want to see.”