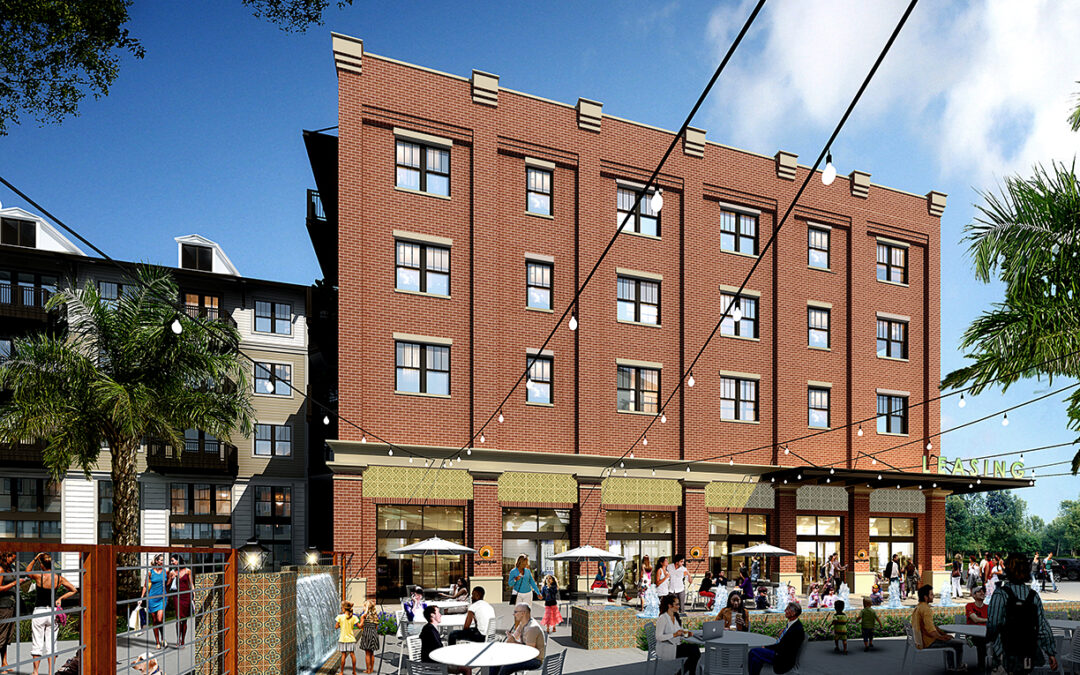 In Gilbert, Epicenter at Agritopia puts the finishing touch on an Arizona-centric community

Images courtesy of Epicenter at Agritopia

A 20-acre field at the corner of Higley and Ray roads in Gilbert was once planted with citrus, cotton and alfalfa. Today, it sprouts a 350,000-square-foot, $100 million-plus mixed-use development featuring apartments, restaurants and retail. But lest you think this is a same-same-more-of-the-same project like others taking root across cities in Arizona, it’s not. The project is a carefully cultivated, meticulously curated development done by Johnston & Co., the folks who dreamt up and built Gilbert’s Agritopia, the farm-centric residential and retail community that mixes old-fashioned small-town vibes with modern family living.

“Epicenter at Agritopia, is meant to be the more urban, dense and commercial complement to our original Agritopia,” says William Johnston, CEO of Johnston & Co., describing the new project. “It was designed to both be a destination and to serve the new and original community.”

The Epicenter plot was once part of a 160-acre Arizona homestead, acquired and farmed by the Johnston family in the 1960s. William Johnston’s father, Joe, founded several restaurants in the Valley and Gilbert, before reimagining the family farm as Agritopia in the late 1990s and early 2000s. “After we did Agritopia, we went through several scenarios for what is now the Epicenter site,” says William Johnston, “including making it a grocery center or a commercial development.” The recession, he says, blew apart their plans and, in 2012, they decided to self-develop the plot into an “urban core for suburbia,” with a denser population than Agritopia’s largely single-family options, but with services and uses for everyone.

In 2018, Johnston & Co. partnered with StreetLights Residential to develop and build The Tyler at Epicenter, 320 upscale apartment units above the 20 street-level retail and restaurant offerings. The studio, one-, two- and three-bedroom units welcomed the first tenants in January 2022 with touches such as mudrooms in the entry hall, stone-clad kitchen islands and—in some units, as a pandemic pivot—work from home alcoves. As a nod to Agritopia’s agrarian past, the apartment’s main lobby includes a greenhouse-style conference room and a “maker’s garage” with tools where residents can work on projects. “We know how to build quality single-family homes,” says Johnston of the residences at the original Agritopia. “However, we partnered with StreetLights because they’re the multi-family experts.”

While StreetLights is Dallas-based, Johnston & Co. tapped Floor & Associates of Phoenix to handle the landscape for Epicenter and their own history to reach out to potential restaurant and retail tenants. “My father was a restaurateur and president of the Arizona Restaurant Association, so he has had long relationships with people in the business,” says Johnston. “We wanted a mix of commercial tenants that were local, cared about quality, had passion and understood their craft. We basically went out and courted them.”

Indeed, Johnston & Co. used a “best of Arizona” approach to lure prospective tenants to open—in many cases—their first Gilbert/East Valley locales. Chef-driven Belly Kitchen & Bar, with an original location in Uptown, has opened at Epicenter, as did Beer Barn and Peixoto Coffee. Valley favorites like Buck and Rider, Matt’s Big Breakfast and Gadzooks are also joining Epicenter’s food fest. Bunky Boutique, UrbAna, Why I Love Where I Live and Vintage Home are among the retail offerings, along with hair salons and fitness centers. “The idea is that residents of Agritopia and Epicenter don’t have to get into their cars to go for coffee, get a drink, have dinner or shop,” says Johnston. “It’s all walkable between the two communities.”

By early 2023, all the final pieces of Epicenter at Agritopia will be in place. Residents will be able to get their bikes out of The Tyler’s indoor storage room, charge their EVs on site, sip a kettle corn latte at Peixote, get enchiladas at Gadzooks and stroll over to Agritopia to score some fresh produce from the farm. In Gilbert, it promises to be a good life.